THE BOW BELLS MILESTONES
on the A22 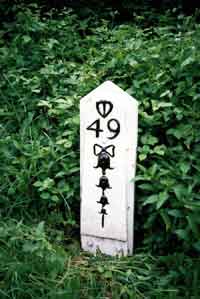 "As well as architecture, art and administration, roadway development in England slumped after the disintegration of Roman civilisation.  For the next 1,000 years the strategic road network which had been unsurpassed until this century literally fell to pieces without the direct maintenance of a disciplined central authority.

In the Middle Ages the responsibility for the upkeep of the roads fell to the local Parish, and every able-bodied man was required to work 4 - 6 days a year by filling the potholes and building up the road surface with small stones and gravel.  Many by-ways had a dirt surface and heavy rains turned these into a morass where vehicles sunk to their axles.  The poor condition of roads became a source of public concern, and in 1663 Parliament passed the first Turnpike Act which gave private enterprise the opportunity to level tolls to pay for the maintenance of the road surface, and during the next 150 years nearly all the main roads of the country would be covered by 1,100 Turnpike Trusts.  A later Act of 1740 required the Trusts to measure the roads and set up posts every mile.

The City of London - East Grinstead Trust of 1711 was extended to Forest Row in 1724 and Wych Cross in 1785, where the Toll House stood on the triangle of land between the roads.  Their milestones are a visual pun of the mileage from London, represented by Bow Bells, with one unique exception.  Wych Cross has two milestones over half a mile apart, both showing 35 miles to London.  This was due to a major re-routing further north in the early 19th Century, and the re-siting of the posts to Wych Cross.  The different Trust to the south declined to move their posts, leaving the need for a gap-filler.  This is an entirely different design with numbers denoting the distance to London surmounted by an anthemium or classical stylised honeysuckle design."

The 50 mile Bow Bells sign happens to be on the roadside in Whitesmith.

The signs show a string of bells hanging below the mileage number and above it is the Pelham Buckle, the Pelhams once being the local Turnpike Trustees.  All are made of Sussex iron. 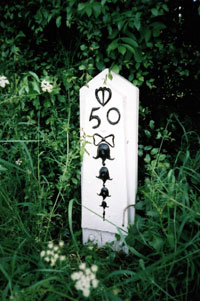 From SUSSEX INDUSTRIAL ARCHAEOLOGY STUDY GROUP
Issue 1 April 1968
"Tollhouses and Milestones
In 1820 there were 521 miles of turnpike roads in Sussex according to the Turnpike Trust Returns Register (East Sussex Record Office, QDT/EWl).  The Parliamentary acts authorising the stopping up of roads with gates in the county range from 1710 to 1841.  The former was the Sevenoaks-Tunbridge Wells section (its terminus then in Sussex), the latter the Cripps Corner - Hawkhurst section.  Most of the turnpike trusts were wound up by the 1870s, the gates burnt, the tollhouses sometimes demolished as at Crabtree near Cowfold in 1878.

The tollhouses remaining (and nearly all are in perilous positions in view of road widening) represent the most substantial record of an extremely important stage in the history of highway administration.  Most were very humble, with two principal rooms, a bedroom and a living room - such as the weather-boarded examples in the Worthing - Shoreham - Horsham triangle.  The last surviving specimen of this type, dated 1807, has been removed from Upper Beeding, for re-erection at the Weald and Downland Open Air Museum.

Milestones were at first erected voluntarily by the trusts, and compulsorily by an act of 1766.  The finest series are the 'Bow Bells' milestones on the London - Eastbourne/Lewes roads."

There is a story that travellers who earned their living while walking up and down the turnpike roads were referred to as "pikeys".

From "The Milestone Society"
"The Romans laid good metalled roads to move soldiers and supplies quickly across their Empire: they measured distance to aid timing and efficiency, marking every thousandth double-step with a large cylindrical stone.  117 still survive in the UK.  The Latin for thousand was 'mille' and the distance was 1618 yards; the eventual British standard mile was 1760 yards, although 'long' miles also existed into the 19th century.  After Roman times, roads developed to meet local community needs:  in 1555, an Act of Parliament made local parishes (or often townships in the North) responsible for their upkeep and boundary markers became important.

In 1667, the Justices were ordered to erect guideposts at cross-highways and on the moors.  At this time, travel by road was slow and difficult.  The sunken lanes became quagmires in wet weather and occasionally both horses and riders were drowned.  It took 16 days to cover the 400 miles from London to Edinburgh.  So Turnpike Trusts were set up, by Acts of Parliament, from 1706 to the 1840s.  Groups of local worthies raised money to build stretches of road and then charged the users tolls to pay for it - just like the 'M6 Toll' today.  The name 'turnpike' comes from the spiked barrier at the Toll Gate or Booth.

The poor bitterly resented having to pay to use the roads and there were anti-turnpike riots.  From 1767, mileposts were compulsory on all turnpikes, not only to inform travellers of direction and distances, but to help coaches keep to schedule and for charging for changes of horses at the coaching inns.  The distances were also used to calculate postal charges before the uniform postal rate was introduced in 1840.  At the height of the turnpike era, there were 20,000 miles of roads with milestones.  From the 1840s, rail travel superseded roads and many turnpike trusts were wound up.  In 1888, the new County Councils were given responsibility for main roads and Rural District Councils for minor routes.  As faster motorised transport developed so the importance of the milestones waned." 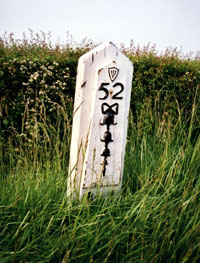 See also :
Sidney and Beatrice Webb, 'The Story of the King's Highway'. 1913, reprinted by Frank Cass, 1963.  Provides a detailed analysis of turnpike administration.